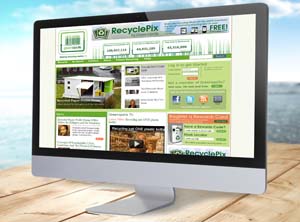 The system was integrated through webservices with various outside providers.

There are also pro-blogs and videos, and professional partner pages, as well as a sub-site called "Scan At School" that encourages school children to recycle, and schools are awarded prizes.

The difference to thinkgreenrewards was that this site also had a lot of social media (blogs, videos), and encouraged kiosk based recycling, whereas thinkgreenreward encouraged street-side pickup. Maybe more deciding, both sides had different internal business units running them.

The development was done similar to SCRUM, where timed production release cycles were planned by choosing various tickets from a backlog in a Trac system. For each release, there was a development phase, followed by a strict QA cycle. The system was version controlled using Git and Jenkins, and I designed a clean branching strategy. All developers were virtual on the team. Communication was done using ongoing chat (IRC), email, and live document sharing using Google docs and other digital tools.